"Easily the most beautiful production at this year's Fringe, an exquisite piece of theatre." Broadway Baby on The Idiot Colony 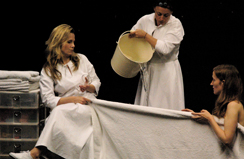 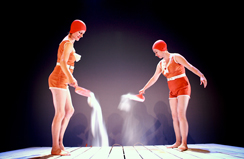 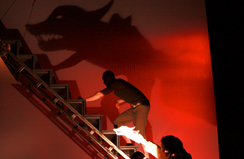 Cassie Friend is a founder member of RedCape Theatre, she devised and performed in The Idiot Colony and 1 Beach Road. She co-directed Be Brave and Leave for the Unknown and will be performing in RedCape’s new show ‘Thunder Road’ opening 2018.

She is Artist-in-Residence at South Street Arts Centre where she has directed several commissions for their award winning festival Sitelines; Jacksons Corner, The Final Whistle and Kaspar.

Cassie is currently developing two shows for RedCape Thunder Road and Children of the Revolution – a show about Protest. With Sabina Netherclift she is researching a show about the Leek embroiders and for Sitelines a show specifically for the re-opening of The Reading Abbey Ruins in 2018.

Rebecca Loukes trained in the body awareness practices of Elsa Gindler with Eva Schmale and Charlotte Selver and Asian martial/meditation arts with Phillip Zarrilli.  She co-created and co performed The Idiot Colony and worked as Dramaturg on 1 Beach Road.  She is currently devising the new show.

As well as being a co-founder of RedCape Theatre she is Senior Lecturer in Drama at the University of Exeter and Associate Editor of the Journal of Theatre, Dance and Performer Training.

Catherine Dyson is a writer and performer. For RedCape she performed in 1 Beach Road, worked as a writer on Be Brave and Leave For The Unknown, and is developing Thunder Road and Children of the Revolution.

As a performer and deviser she has worked with, among others, Chris Goode, National Theatre Scotland, Uninvited Guests and David Rosenberg. Her writing has been commissioned and supported by National Theatre Wales, BBC Radio, Dirty Protest and the Sherman Theatre. Current projects include Transporter, a solo show for ages eleven and above, for Theatr Iolo.

Turtle Key Arts unlocks creative potential in individuals, companies and communities, producing and devising original, ground-breaking, inclusive art to entertain and inspire. As creative producers they enable each project to reach its full artistic potential and ensure that participation and education is embedded at the heart of everything they do.

Their work has a UK and international reach through a wide variety of innovative projects. With many different collaborators and partners. They have played a committed role in advancing participation in the arts by disabled, disadvantaged and socially excluded people.

South Street Arts Centre is an Arts Centre in the heart of Reading presenting a diverse range of performing arts from both the professional and community sectors. The professional programme attracts the very best new and established names in fringe theatre, comedy, music and live literature.

We invite a diverse range of artists and innovators to work with us on a project by project basis. Collaborators so far have included: